In the Upper Midwest 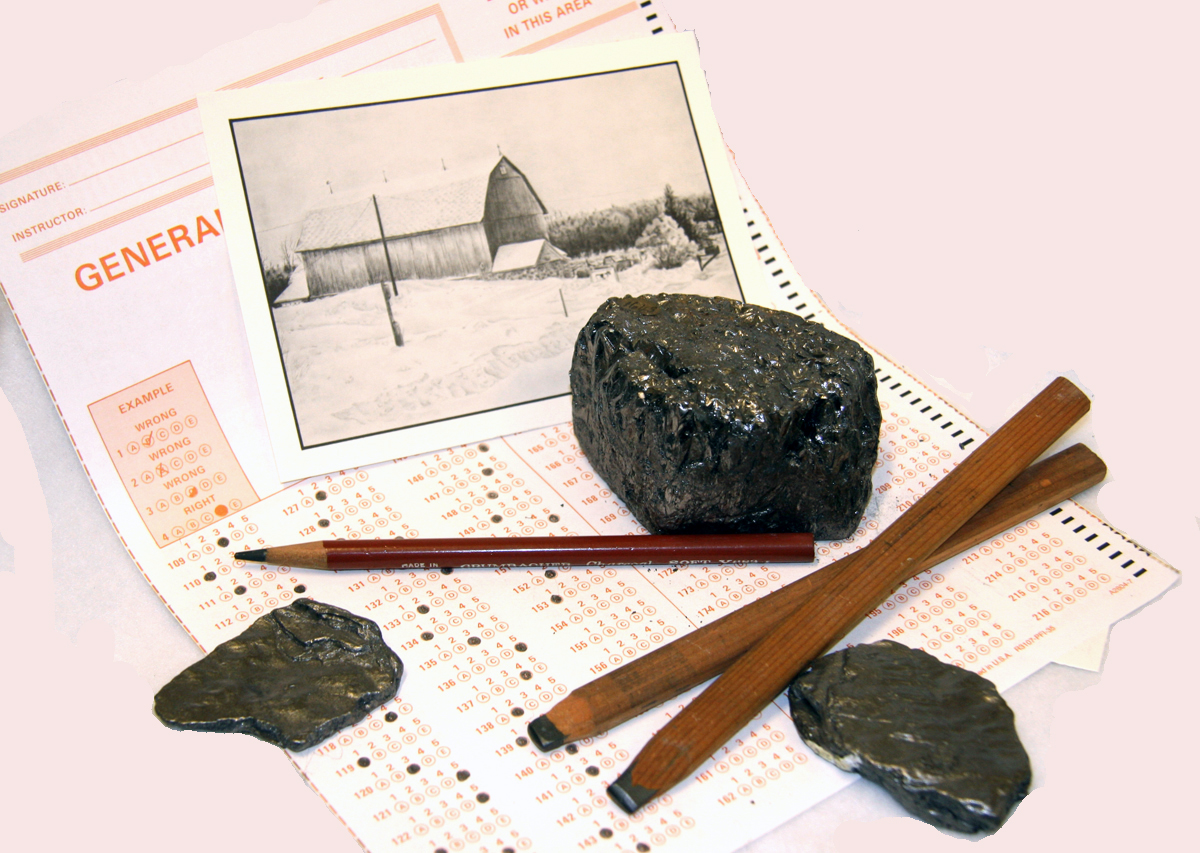 Some of the world’s greatest art was rendered in graphite, a mineral composed solely of the element carbon. Graphite is a dark gray to black, very soft, shiny metallic mineral with a distinctive greasy feeling. One of the Earth’s softest minerals, graphite will easily leave marks on paper, which is why it is used for fine artist pencils. Even modern pencil ‘lead’ is composed of graphite mixed with clay. Paradoxically, even though graphite is soft enough to be used for drawing and as a lubricant, it is also strong enough to be used in refining furnaces, for brake linings, and to create expensive lightweight sports equipment. Even more surprising, this versatile mineral was originally living organic material (usually plants) that was altered to form graphite as sedimentary deposits were metamorphosed.

Graphite’s extreme softness, greasy feel, low specific gravity, and the ease with which it leaves dark gray to black marks on paper, usually serve to distinguish it from similar looking metallic minerals. Its name comes from the Greek word ‘graphein’ (‘to write’), a reflection of centuries of use in writing and drawing. Graphite is produced by metamorphosing organic material originally deposited as sediment or mixed with sediment. As organic material is metamorphosed, hydrogen and oxygen are driven off as water, leaving the carbon behind to form graphite. Well-formed crystals of graphite are quite rare in nature, and most graphite occurs in its massive form. It is a metallic mineral, black to dark gray in color, with a distinctive greasy feeling. As with many mineral properties, this greasy nature is a reflection of its internal crystal structure. On an atomic level, graphite has a sheet-like structure where carbon atoms lie in sheets that are only weakly bonded to the overlying and underlying carbon sheets. Strong chemical bonds, called covalent bonds, exist between the carbon atoms within each sheet, but the sheets are only held together by weaker surface attractions, called Van der Waals forces. Van der Waals forces are the same attractive forces that allow a gecko to climb smooth glass surfaces with its padded toes. They are easily broken forces, making massive graphite soft despite the presence of strong covalent bonds within its sheets.

In Our Earth: The Geologic Importance of Graphite

Graphite most often occurs in metamorphic rocks formed from regional metamorphism or contact metamorphism of organic-rich sedimentary rocks, such as organic-rich marble, quartzite, schist, gneiss, and metamorphosed coal. The sediment’s original organic component provides the source for the carbon from which graphite forms. As coal is almost completely composed of organic carbon, its metamorphism can produce large amounts of graphite-bearing rock.

To a lesser extent, graphite is also found in some igneous rocks, igneous veins and pegmatites that are associated with metamorphosed graphite-bearing sedimentary rocks. As with the metamorphic occurrences, the graphite component of these igneous bodies is assumed to have originated from the associated organic-rich sediments. Much more rarely, graphite also is found as small nodules in some iron meteorites.

Crystals of graphite are relatively rare and most often occur in marble where they may occur with pyroxene and spinel - two other minerals that also form from the metamorphism of organic impurities in limestone.

Although graphite and diamond may appear to have little in common with one another, the two minerals are actually polymorphs. Polymorphs are minerals that have the same chemical composition (in this case, carbon), but different crystal structures. Although graphite and diamond have the same chemical composition, their different crystal structures give them very different physical characteristics. For example, diamond is one of the hardest known substances, while graphite is one of the softest. Diamonds are typically clear, make excellent abrasives, and are good electrical insulators. In contrast, graphite is opaque, is used as a lubricant, and is a good electrical conductor. The two minerals form under very different circumstances, but can be converted into one another. Natural diamonds form deep within the Earth and are only rarely brought to the surface by volcanic activity, hence their high economic value. Graphite forms close to the Earth’s surface, usually as an alteration of organic carbon during burial and is actually the stable polymorph at Earth’s surface conditions. However, diamonds are stable enough that their transformation into graphite takes place extremely slowly, so you shouldn’t have any fears about your diamond jewelry

As mentioned, graphite forms from the alteration of organic material during metamorphism. Recently some businesses have offered to go one step beyond this natural process. For a fee you can now arrange to have your remains, or those of a loved one, turned into diamonds as a keepsake or family heirloom.

In Our Society: The Economic Importance of Graphite

Graphite’s remarkably diverse properties allow it to be used in many different ways. By volume, most of the graphite mined in the United States is used to line the interior of furnaces or to make crucibles for use in high temperature foundries, since graphite can withstand extremely high temperatures without melting. Its high melting temperature and insoluble nature also mean that large amounts of graphite are used as lubricants and in the manufacture of brake linings, alkaline batteries and some paints. Because of its unusual crystal structure, graphite exhibits many of the properties characteristic of metallic materials such as its ability to conduct electricity. Consequently graphite is also used in the production of electrodes and generator brushes.

Its crystal structure allows graphite to be used in ways that initially appear to be contradictory to one another. Graphite is prized for both its strength and weakness. The covalent bonds within graphite’s sheets are very strong and graphite has a relatively low specific gravity. If graphite is aligned properly it can be used to produce expensive, high-strength, low-weight sporting equipment. On the other hand, the Van der Waals forces holding graphite sheets together are weak, allowing graphite to be used as an excellent lubricant. These weaker bonds also allowed graphite to have originally been used as the ‘lead’ in lead pencils. Pencil ‘lead’ came to be known as lead because early Europeans used to call graphite ‘plumbago’ or ‘black lead’. Although clay minerals now form a significant part of the ‘lead’ in most modern pencils, the finest artist drawing pencils are still composed of relatively pure graphite. In any event, despite urban legends to the contrary, you cannot get lead poisoning being hurt by a ‘lead’ pencil, as it does not contain any lead!

The balance of clay and graphite in modern pencils leads to one of the uses of graphite most familiar to many students, namely the use of #2 pencils to fill in the bubbles on scantron test forms. Graphite is a shiny mineral that reflects light. Traditionally, most scantron readers read the bubble sheets by shining a light on the test form and light reflecting off the filled circles records the students’ answers. #2 pencils were simply the cheapest, most readily available writing instrument that had enough clay to keep the pencil’s graphite from smearing, yet retained enough shiny graphite for pencil marks to be read by a scantron machine.

Graphite in the Upper Midwest

Although graphite can be found in several northern and central Minnesota areas, including Crow Wing, Cass, and Morrison Counties, most Minnesota and Wisconsin graphite occurs as very fine-grained sooty material that is disseminated through metamorphic rock. Concentrated graphite is rare in the Upper Midwest.

At a glance, graphite’s gray color and shiny metallic luster appear similar to some other metallic minerals. When handled though, graphite’s extreme softness, greasy feel, and low specific gravity usually serve to distinguish it. If you have any doubts, they should be dispelled by the dark gray to black graphite marks left on your fingers after handling it.

Although graphite and galena are both gray minerals that exhibit well-defined metallic luster and leave marks on paper, they can easily be distinguished by their specific gravity, cleavage and texture. Its high specific gravity means that a sample of galena feels very ‘heavy’ for its size, while graphite’s low specific gravity makes it samples feel relatively light. The two minerals also differ in their cleavage and appearance. Galena exhibits cubic cleavage, which means that it has three internal planes of weakness along which it can be broken and these planes are at right angles to one another. In contrast, graphite only has one direction of cleavage. Galena also usually occurs as large crystalline masses, while graphite typically occurs in its massive form. While both minerals can leave marks on paper, it is much easier to do this with graphite. In fact, graphite is soft enough that it should leave marks on your fingers simply while handling it. Graphite’s greasy texture should also serve to distinguish it from galena.

Some forms of hematite exhibit a metallic luster that is similar to graphite, but the two are readily distinguished by their specific gravity and streak. Hematite has a higher specific gravity than graphite, so a sample of hematite feels heavier for its size than a sample of graphite. When hematite is rubbed on a rough surface it also leaves behind a reddish brown streak that is quite distinct from the black streak of graphite.